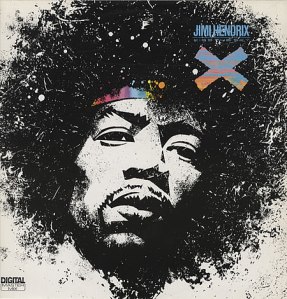 In the office today, listening to this record, bringing back so many memories I thought I’d write some of them down. This was the second Jimi Hendrix record I bought. The first being the soundtrack to the Motion Picture Jimi Hendrix. I bought my first copy of this record on cassette at The Sound Shop in Columbia, TN. (I can still remember how they smelled when you tore the plastic wrap off and opened the box.How the cassette would rattle in it’s cradle. This one was clear! Cool!) My first Hendrix record is the one that drove me to play guitar, THIS one was my sonic bible. For a Hendrix neophyte, which I was, this was a great way to dive in; music from all over his career. Randomly sequenced, it had no real chronology to it, just Jimi firing it up for 45 minutes. Live stuff mixed with studio stuff. I hadn’t heard any of the original records or 1,000’s of bootlegs at this point so this was all fresh and new to me at this point. This record was released in 1984 (according to wikipedia) so I probably picked it up because it would’ve been the most recent release. This is the tape that I took to my guitar teacher, Doug Thurman, and asked him to teach me Voodoo Chile (Slight Return). Which forced me to learn my first chord and very nearly ended my guitar playing career before it started!
That E chord, yikes! “Just put this finger here…” I felt like my hand would cramp and fall off! I couldn’t make the chord, let alone play a song that required me to use this contortion in it! Something made me keep going though. I went home and locked myself in my room and practiced. A piece of paper with hand drawn dots showing where my fingers go. Sore fingers, blisters. Friday night; “you want to go out? Nah, I’m gonna stay home and practice.” One chord, over and over, sometimes 4 of the 6 strings would ring, sometimes only 2, days went by and by the weekend I was getting all 6 strings to ring a little. Finally, I thought, a little daylight! One chord = 1 week! That’s my formula! Now I know exactly how hard I’ll have to work to get this guitar under control!

Nah. That’s the beauty and magic of a guitar, it’s just like a woman; once you think you have them figured out, they change BUT you don’t mind the change cause their just that awesome and amazing!

My guitar would give me something and then seem to take it back and then some. She’d give a glimpse at what might be possible and then close the curtain as if to say “But not yet.” The more I dug the more I wanted. The more frustrated I got the harder I practiced. Great sounds would mesh with awful clams so that I was constantly feeling like I was stranded in the ocean just grabbing at anything floating by. Just trying to stay afloat.
I met with Doug once a week (Mondays I think), so I was always in a hurry to learn the next thing. I didn’t have time to learn the solo to Voodoo Chile because I wanted to learn Purple Haze! The next Monday was “show me Red House!”
This was late 1988/89. There’s no internet, no youtube to refer to. You can’t just pull up footage of Jimi playing the songs, or a million guitarists in their homes videoing themselves playing the songs. This is archeology. Sonic Archeology! You had to dig and scrap for any piece of information. By this point, I knew what Jimi looked like from the two cassette covers that I had. I’d bought a poster of Jimi from the Isle of Fehmarn (today I realized where the shot was taken!) Pink pants, multicolored jacket, leopard skin strap! White Stratocaster, man I gotta get one of those!
Doug rented the VHS tape of Jimi Hendrix the movie and invited me over to watch it. 2 hours later, I’m more jazzed than ever. A true disciple! Jimi at Monterey, burning his guitar, Woodstock playing the National Anthem, The Isle Of Wight casually throwing the guitar over his shoulder at the end of his set. I bought the VHS tape and wore it out, bought another one and wore it out, bought a third one, same thing, then they invented DVD’s! (I’m on my 3rd DVD copy as I write this). No MTV in our house yet but we had Night Trax on WTBS out of Atlanta. They showed a clip of Jimi playing the Star Spangled Banner in Berkeley. It came on on Saturday night around 1:00 am. I remember sitting there in the dark in my parents living room, mouth hanging open, in shock! Another piece of the puzzle! Books started flowing into my orbit. Jimi was 27 when he died. He died in London, he was in the 101st Airborne, he’d played in Nashville early in his career, played with Little Richard, King Curtis, Joey Dee…every little piece of information I could find was like a revelation.
So now it’s 2014, I’ve been chasing Jimi’s secrets since 1989 or so so that’s 25 years! Still ain’t playing them right. I’ve met him a couple of times in my dreams but I’m always too excited to remember to ask him anything!

Once again, we are safely back home from an amazing tour! Our trip out West was one for the books. Driving back across the country from Utah to Tennessee, I had plenty of time to revisit all of the awesome scenes from the tour. We started with 2 fantastic nights in Sioux Falls, SD with our friends Lance and Sarah @Old Skoolz. That was the perfect way to start our tour! Paying a visit to our friends at Byron’s in Pomeroy is always a blast. Yellowstone Brewery in Billing is always a blessing to visit.
Two new (to us) venues followed; Sapolil Winery in Walla Walla, WA and Duff’s Garage in Portland, OR. I can’t wait to revisit both of these places! Jazzbones in Tacoma, WA. (Where half of our gear fell out of the trailer and was almost lost forever until the amazing Weber family rescued it!) and Double Mountain Brewing in Hood River, OR couldn’t have been more fun and I hope to return real soon.
The Mt. Baker Blues Festival in Bellingham, WA was next and the only thing more stunning than the view was the kindness and hospitality of our host, Mr. Lloyd Peterson. It was such a joy to get to perform at his beautiful festival.
Heading down to San Francisco, CA to play at Biscuits & Blues for our friend Steven Suen is always an honor and a privilege. It was also, sadly for me, the last night of the tour for our bassman; Mr. Doug Swanson. Staying behind to spend some well deserved time off with his beautiful family, he’ll be rejoining us next month.
Finally we made our way to Salt Lake City, UT to perform at our old friend Carl Weyandt’s new venue Bleu Bistro. If you’re ever in SLC and are hungry for great food and great music make your way to Bleu Bistro, you won’t be disappointed! Joining us for the last two dates of the tour was our new friend Jon Q, filling in for Doug on bass. It was great to get a chance to get to know and jam with this fantastic musician. For our last night on the road, we were the guests of Carl and his wife to Red Butte Garden to see Galactic and Trombone Shorty. A really nice treat for us!
The only thing left was the 24 hour drive home. As the miles roll by, I’m reminded of how beautiful our country is. The landscape changes from wide open spaces to mountains to rolling plains to those lush green Tennessee hills that I proudly call home.
I want to say thank you to my partners in crime; Tour Manager Milburn Edwards, Bassist Doug Mug Swanson, Drummer Ashley W. Smith and Bassist Jon Q. for giving their all every night.
17 days, 6,885.4 miles total. It’s what we do. #loudisgood #twangandbang 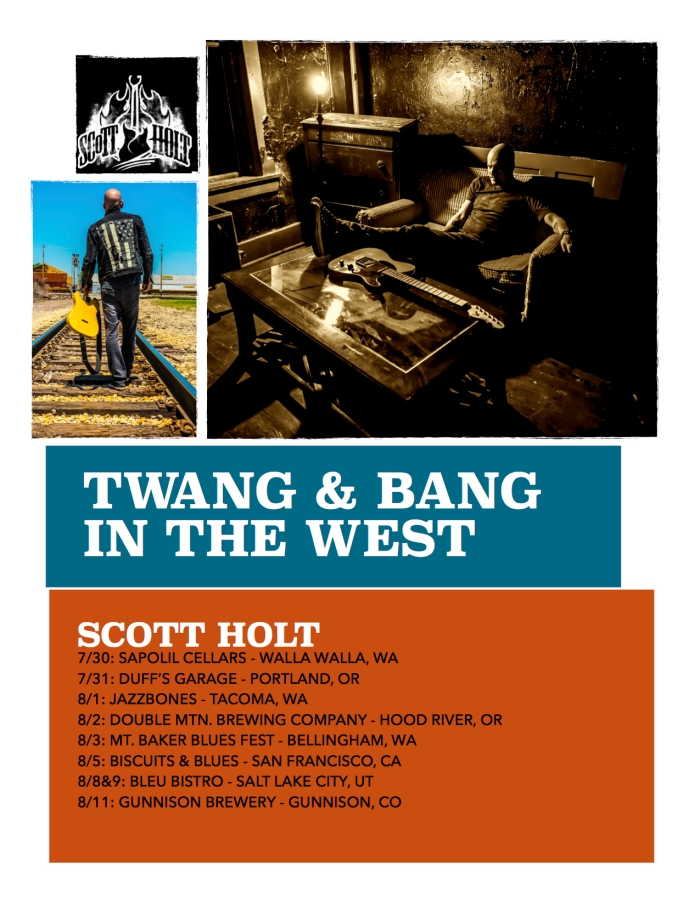 What a wild and strange trip this tour has been! On paper, going into it, it looked like a disaster; Bass player quits after the Canadian paperwork is filed, New bass player has no passport, since it’s a 4 week tour and it’s last minute no bass players were able to help us out and so Tom and I struck out alone for Wausau, WI and all points north. Now with 2 1/2 weeks under our belts and light at the end of the tunnel starting to show, I can say that God has (once again, like always) blessed us tremendously! Starting in Minneapolis where we had our good friend Trent Boldt play bass with us, then on to Regina, SK where our new friend Jon Nichols was our bassist. In Edmonton Travis Switzer and Curtis Ebner shared the bass duties. Throw in a couple of acoustic duo dates between Tom and me and here we are in Livingston, MT, our old friend Calvin Johnson flys out to meet us and finish the tour and were almost pointed home!

I have to say a thing about club owners; As a professional musician for 20+ years, I’ve dealt with a lot of people, all kinds, but we are blessed by the number of club owners that we work with that are kind, helpful and considerate! If I try and name check them all I’ll miss someone and feel bad but I have to say something about an incredible act of kindness that Tom and I received a couple of days ago. We had just arrived in Livingston, MT for an acoustic show that night. We stopped for lunch and like I do sometimes, I checked us in on Facebook. At the end of our meal the waitress said “Your bill’s been taken care of.” Turns out our friend Lance at Old Skoolz in Sioux Falls, SD had seen my check in and called the restaurant and paid our tab! Lance has had us play at his place 4 or 5 times and always works hard getting the word out and helping us reach new fans in his market and we’ve always thought highly of him for that but this gesture had Tom and me stunned for the rest of the day. Thanks Lance!! Also have to shout out to Cole Murphy at The Murray Bar in Livingston, MT for helping us fill in some gaps and for being a great supporter of us.

Come on out to Legends in Chicago on Friday night for a Windy City fandango!!