Back when I was a virgin, Elvis was my first. My ears were virgin when I got introduced to Elvis. My soul was virgin when I got introduced to Elvis. My eyes were virgin when I got introduced to Elvis. My molecules were virgin when I got introduced to Elvis. When music truly HITS you…arrests you…convicts you…you respond, you sweat, you tingle, you tremble. You vibrate to that frequency. It’s an epiphany…or climax…or the perfect bite of Tres Leche cake… I was HOOKED! It was a done deal. I had been indoctrinated (or inoculated) on RCA 45’s from near birth. I knew Hound Dog, Don’t Be Cruel and Blue Suede Shoes. My parents took me to see Elvis in 1975, in Murfreesboro, TN. It was my first concert. I’ve never forgotten it; that feeling, the screams, the smell of popcorn, the wax paper Coke cups, the screaming, the lights, the poster, the energy, the screaming…My most vivid memory is at the end of the second song, Elvis threw his acoustic guitar (Black) behind him without looking and Charlie Hodge caught it. I’ve thrown guitars my whole career without a good explanation, until this moment. “I do it because I saw Elvis do it…”
I had an older cousin ( Melanie) that owned the “Aloha From Hawaii” concert on “double-disc vinyl”, I borrowed it (with the promise of safe return) and listened to it on my Realistic turntable. I had a friend (Edwin) who had the “Live From Madison Square Garden” record, I listened to it over and over, trying to put a visual to those sounds. The funky introduction to Hound Dog alone was enough for a 12 year old kid. “You ain’t nothin’…nothin…nothin…
I remember watching the CBS special. I taped the audio on cassette tape. I wanted to capture this moment, engrossed and enthralled: my parents were wincing about Elvis’ appearance and weight. I thought he looked like a god. Remember kids; no Youtube, no Google. Also remember kids; at this point there was NO MTV (MTV was a cable channel that played music, now they are a reality show channel, so how could you know?).
On August 16, 1977, I came home from school, sat in my dad’s chair and watched Gilligan’s Island on the local CBS affiliate (channel 5) at 3:00pm. This was before the days of the “constant scroll” so when something creeped across the bottom of the screen, it was important. “…Elvis Presley was pronounced dead at Baptist Memorial Hospital in Memphis…” I called my mom at work. My heart hurt. The foundation had shifted. I now lived in a world without Elvis.
I get it …someday… (long time from now) Kanye West will pass or Justin Beiber and people will remember where they were, what they were doing. It’s the natural order of things. Jimi is captured in paisley, Elvis in a jump suit and Kurt Cobain in flannel. I was born and raised with Elvis walking the earth, (and Jimi Hendrix and all four Beatles by the way). I was blessed to have the chance to be in the same room with Elvis and experience that energy, first hand. It was regal. It’s real. It’s not a sweet memory, it doesn’t happen “all the time” and it was no accident. It’s no “figment of my imagination”. I felt it, I saw it, I heard it. I was there. Call him the KING OF ROCK & ROLL. God knows, he earned it. 80 years. Happy Birthday Elvis! #TCB 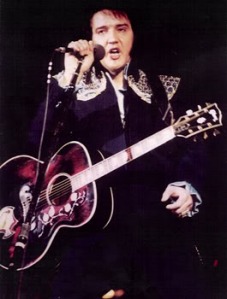 American Roots and Blues musician, 10 years with Buddy Guy and 10 years as a solo artist. View all posts by scottholtband

One thought on “Happy Birthday King!”